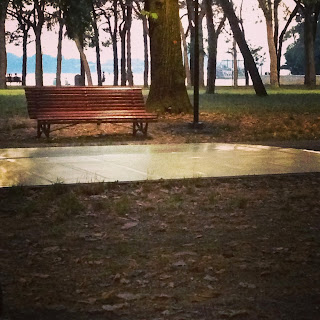 After the last two years, I really did not think I would be spending this Ramadan outside of the comfort of the Adhaan ( Call for prayers), the family gatherings, and the fuss over what to cook for Iftar. I remember distinctively writing about Ramadan in London last year for the Art Dubai blog, thinking to myself, next time, I will have nothing to write about, my experience will be just like everybody else’s in Dubai.

Fast-forward a year later and here I am in a city I never imagined I’d ever reside in, a city of narrow canals, and foot traffic that is in its essence, a city that struggles to survive.  Ramadan this year came with an official warning from the Italian media of the impending heat wave that will hit the country; a heat wave that media claim has no parallels in the last 10 years.  It is not a pretty weather, with structures too old to handle Air Conditioning, and alleys so narrow for ventilation, Venice in the summer is a difficult city.

Venice in Ramadan, is almost impossible.

With 50,000 residents give or take, I did not really expect to fast with fellow Muslims from the community here, neither did I anticipate paper crescents adorning the lamp posts, but I expected that the spiritual fasting would be the most difficult given that I am now living in Italy, a country that aims to satisfy quite literally all of your senses. But no, I actually was challenged physically to the point that I did not even imagine I could fast; the heat, humidity, long hours of the day and the walking everywhere were not easy; never in my life did I feel that Ramadan was exhausting physically until I moved to Venice.

I spent a couple of days fussing over my body, and when I took control of it, I took a glance at my heart and smiled at my foolishness in focusing on the ritual rather than the worship. I walked every morning trying to find ways in which I can be spiritual; I thought of sitting on a bench in Giardini facing the Grand Canale and mediating a little; but mosquitoes found their way to my legs, arms and face and it did not feel spiritual at all.
I tried to sit on my couch and read Quran or watch Moez Masood [1]speak of faith and God but these setting were interrupted by the most-needed showers during the day to cool off. What I believed would be tears this year over my beautiful Quran pages, were actually drops of sweat that just made the whole experience simply uncomfortable.
I really was not feeling the spirituality. I even fetched dates from Dubai with me to feel closer to home, made some lentil soup which Mom always makes sure is on our Iftaar table, but nothing worked.  Until that morning I left Arsenale where I work and went to buy some stationary for the office only to be stopped by the crowds of people weeping standing in front of the church in Via Garibaldi, saying goodbye to a wooden coffin carried by sad strong men. I couldn’t believe it at first, it felt like a scene off a movie; the sounds of people crying was too loud, and the silence of the street was too quite. I stood there and stared at that coffin for as long as I could, I couldn’t take my eyes off it. I wondered who was in it, and what has happened, and what life did he/she lead. I kept staring until I felt my tears cooling off my burnt cheeks. I looked around me fearing for a second that they will figure out that I was an imposter, but my tears were too real.

The crowds of mourners started going inside the church and I couldn’t help but follow. I sat there with them along with my tears, they prayed together, I prayed alone but all under one roof. At that moment, I forgot that I had a scarf on my head, and a Quran application on my phone, I only thought of God, and His glory, and this short-lived, almost trivial life.

I stayed for a while inside on the wooden bench, with closed eyes I tried to find that spirituality again. Yes, there are no mosques in Venice, but there are houses of God, and at that point I knew I was the closest to Him.

I left the church and the mourners alone, and walked slowly back to work thinking of the next Ramadan, praying I would live to witness it. Ramadan is somehow a harsh reminder of Death; there is that sense of relief at the end of it that I had lived through it all, and a genuine fear that I will not live to witness the next one. That wooden coffin accelerated all of these feelings usually stretched out over a month in few minutes. That wooden coffin was my reminder of what Ramadan really meant.

I am not sure what I will write for Art Dubai next year on Ramadan, somehow I wish that I will be in Dubai with family, but I also have a feeling that I might be somewhere else. It doesn’t matter really where I am, as long as I am somewhere to witness it again. And pray for Him in all his glory.

[1] Egyptian television and radio presenter, religious leader and activist who focuses on the fields of spirituality, inter-faith dialogue, and Islam in the modern world.

The wooden bench attracted my attention - I have sat on that wooden bench in so many places, letting that place come to me. Then you brought me to another world. We are so far apart in years and places but so close in thought.
Thank you
Mariam in Phoenix (age 86 and making every year count special now.)

Dear Mariam Cheshire,
Thank you for the lovely comment and apologies for the late reply.
You are wonderful.