Just one thought for now | The Venice Diaries 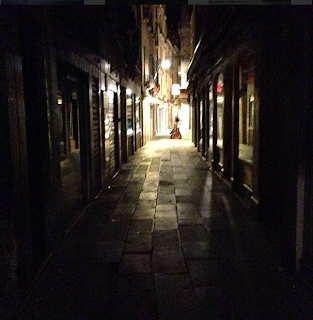 Its been more than 50 days in Venezia, my new home for this year. A city so beautiful that at some point you realise that your attempts at capturing its beauty on camera are futile; Photos will not immortalise these visual masterpieces. A city so different from everything else you have known, a feeling that pushes you to renegotiate everything you learnt about living in cities around the world.

Venezia is not Dubai, not London, and Venezia is certainly not Baghdad. I found solace in cities I have lived in before in their streets that smell like home, platters of food from cuisines similar to mother’s cooking, but here, I found no traces that I can cling on. A stranger in a city filled with strangers from around the world. Thousands of tourists flock this city during the day almost paralysing mobility on the narrow calles “alleys”; you cannot walk, and you cannot avoid being the random stranger in someone else’s photographed memories.

When I first arrived I was overwhelmed with the opening of the exhibition I have been working on for the past 6 months that I missed out on the tiny detail of me moving into another city, changing locations and addresses. At first, I caught myself rushing to capture photos of the different yet similar canals around the city and stealing glances at major landmarks in the hopes of making the best out of my time, but as soon as the exhibition opened, and the work slowed down, I realized that I was indeed not in a hurry to be a tourist in Venice because I was simply not one.

At first, Dubai did not leave me. I found myself waking up almost every morning worrying that I have overslept, miscalculated the time it will take me to reach work, worried about traffic and other things metropolis. It is a strange process to divorce your senses from elements that you cannot control; traffic, car accidents, and half-empty petrol tanks , to be faced with the reality that your body is now under your control, completely. A funny and scary process at times; there is no valid excuse for not showing up anymore.

I am still trying to understand the city I call home today, coming up with different theories on what it represents, what It feels like, how it marks me.. Several conclusions rushed to my head in the first two weeks of my time here, one that was evident is that Venice is not a city for the lonely hearts. I never really perceived Venice to be romantic, in fact, I think it is the complete opposite of that, a city so busy with tourists blocking your way most of the time, that there is seldom any romance left for the others. Gondolas are public, expensive and for someone like me with serious motion sickness, they are not ideal. 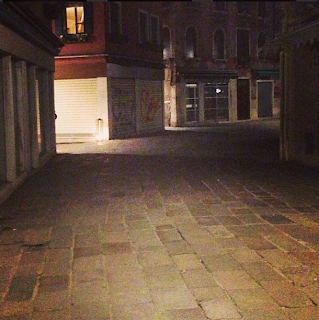 Still, Venice at night is something else. The tourists leave, the locals sleep and then there are people like me, wandering but not lost, looking around, breathing in the moist, the breeze and the silence. It becomes so quite that you can hear your own breath as you sigh for relief walking in one of its narrow alleys. You see your moon shadow, you know the one we lost in our rush to kill the moon.  You feel human again, with a city built with human dimensions in mind; you are no longer small.
And yet, there is this underlying overwhelming sense that you are a burden walking in this city alone. The alleys were created narrow enough to fit one person at times, but mostly wide enough for two people to walk together. Alleys are intimate, and your shadow is not intimate enough.

And it is because of that that I feel Venice is the perfect place for me to be in right now. I am a girl with a lonely heart, and this heart needs to be challenged in a city that strives to counter all of my heart’s arguments on the beauty of beating on its own.

And in the words of Henry James who argued that:

The deposed, the defeated, the disenchanted, the wounded, or even only the bored, have seemed to find there something that no other place could give. But such people came for themselves, as we seem to see them - only with the egotism of their grievances and the vanity of their hopes.

There is so much to write about, nothing new, nothing you have not heard before about the city, and no new visual discoveries that have not been exploited in souvenir shops. No, but there is Mariam in Venice, and that is certainly new.