Half the Story is Better than No Story 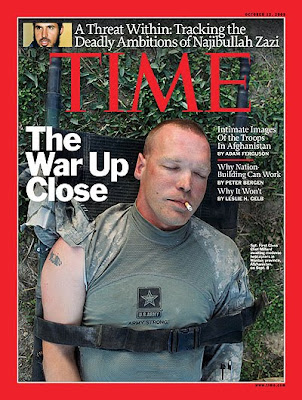 Image courtesy of time.com
Cover Photo by: Adam Ferguson
The War on Afghanistan through the Eyes of Adam Ferguson

The Front Line Club hosted a talk yesterday with Adam Ferguson; he is introduced as an up and coming star in the world of photojournalism and his work recently awarded.
Ferguson begins the talk with showing the audience some of his earlier work produced as a freelance photojournalist; he then plays a slide show with background music on his work as an “embedded” photographer for Times Magazine, with the American army in Afghanistan.
One cannot help but notice the difference between the photos produced as a freelance photojournalist, and the works produced for Time Magazine. The first batch shows what he likes to refer to as the “quieter” moments in a war zone, with photos depicting day to day life in Afghanistan that are usually not covered in mainstream media. However, it is the contrast between the two sets of photographs that strikes the viewer and poses a question about the relativity between camera angles and the editorial policy of a publication.
In his work produced for Time Magazine, Ferguson showed mainly photos of American soldiers in their quests on the foreign land that is Afghanistan. Soldiers are seen smoking, working on their Macbooks, standing proudly in front of carefully placed American flags, and going about their daily routines in what seemed to be a civilian-free photo shoot. The photographs quality is superb and almost artistic but the subject matters do indeed show how strongly “embedded” Ferguson was during his time in Afghanistan.
When the time for the Q&A came, the presenter asked him about possible criticisms about his work as a photojournalist with the American army, and Ferguson simply answered that although he understand the problem and justifies the criticism he still believes that “half a story is better than no story at all.”
I took the opportunity of the Q&A session to pose a critical comment: “It is when half the story becomes the whole story that is what is problematic.” Ferguson stuttered a bit, but then in a refreshing honesty answered that he agrees with me, and that a two-dimensional perspective on the war is indeed “wrong”, but he also justified it by saying that he is not “Islamic”, and if he was then he would have had more access to the other side of the story, the other half.
He also reassured the audience that the editorial policy of Time Magazine doesn’t affect his work, which I found to be a slightly misleading statement from his side since the difference in the subject matters of his work is striking and leaves no room for questioning.
“I turned off my left-wing politics when I joined the American army in Afghanistan” Ferguson said when asked about his own personal opinion about what was happening, and how he conversed with soldiers on the ground. “I do feel like an occupier sometimes when I don’t show respect to the people and just go into a house with the soldiers while women are howling and men are being stripped of their right of privacy.” He added.
A member of the audience asked him about his personal opinion about the war on Afghanistan, and whether it was a winning battle, and Ferguson answered that he doesn’t believe it is a winning situation, and that “democracy in a box isn’t working.”
He was then bombarded with questions about techniques and lighting and black and white photography, but what was evident the whole time was the fact that these images of war which can be at times very emotionally provoking are viewed as art. The fact that documentation of massacres and killings transforms into black and white blurry “artistic” photographs was controversial and is still stirring hot debates with media professionals on the issues of representation and coverage.
Ferguson did call himself an artist at some point, but the word that kept repeating itself in the course of discussion was “embedded” which was at least true to the nature of the photographic coverage. Ferguson also shed light on the agreement he had to sign with the American military agreeing to- and in his own words: Not taking a photograph that he is not supposed to.
When asked if he was tempted to document a rather different reality from what the military wanted, he answered that he could have “broken the laws” on several occasions but he preferred not to “compromise” the rest of the trip and the potential film roll.
The talk was interesting because it simply restated the worst assumptions one might have about photojournalism and the coverage of the “other”, however Ferguson’s photography is superb and his work as a freelance journalist holds the potential of photographs sans agenda.
Posted by Maryam Wissam at 8:09 AM 2 comments:

The Clash of Identities 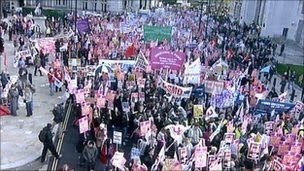 I reach SOAS this morning ready for another failed attempt at making sense of “reading week” – which is a class-free week for us to catch up with our readings- there at the notorious SOAS steps students gathered with banners and painted faces to march together to the parliament house and protest the cuts on education proposed by the “coalition” government.

I stood there with awe and admiration, such naiveté towards the mere concept of expression, and democracy. I stood there contemplating whether to stand too close to “them” or sit a few steps away so that I guarantee a safe distance. I spent a couple of minutes trying to grasp what power was holding me back from marching with them and joining my voice to theirs, and the bigger question posed itself: What am I scared of?

All my life, I blamed governments and police officers for the lack of civil action and democracy, and I knew that the moment I changed geographies, that this rebellious righteous person inside of me will finally get her say, and will become a well-bannered person when the occasion rises. Yet here I was, on foreign lands, with several rights I never enjoyed walking away to situate myself and my bag on a bench nearby.

In this very cold morning and while everyone was preparing for the march, I regretted not attending “how to overcome the culture shock of being in London” seminar that was offered during orientation week. You see, I am not shocked by the alcohol, the hippies, the punks or even the porn industry in Soho; I am deeply shaken by this overwhelming sense of freedom that all of a sudden was thrown at me. I am not prepared to say what I think is “right”, nor am I ready to let go of my worst inhibitions and I don’t think I will be in the very near future.

This “cultural” shock is evident in every class I take, every assignment I prepare for and every cup of coffee I have with fellow students. You see me not sure whether I should whisper the word “corrupted government” or say it in a loud clear voice, I also constantly catch myself replacing words with politically-correct synonymous –just in case-. Who am I afraid of? I don’t know.

What are my red lines in this city? I don’t know

Who is the president I shouldn’t talk about here? I don’t know

What country am I accountable for? I don’t know

Am an Iraqi when I was born in Dubai, and lived there all my life? Apparently not

Am I an Emirati, given that I was born in the UAE and raised there all my life? Apparently not

So many questions that I cannot find answers for in any of the recommended readings, and books I read on a weekly basis. Neither Hunnigton, nor even Marx has the answers to this “clash of identities.”

It is a sad reality to know that the authoritarian regime that you feared all your life lies within you. With every piece of bread and every sip of water in my life I was also fed fear and cowardice. I am now comfortable with myself because I know that this “phase” is momentary, and soon I will be back to my old settings where I can exercise my right of pretending that I am the victim of authoritarian regimes, I am the “third” world, and that I am indeed just a product of colonization and imperialism, denying that I ever had the chance to challenge those notions, and break-free.