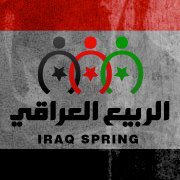 Below are some of my notes and observations on the recent uprisings in Iraq, in what is now being called the #iraqispring. I believe it is important to document these observations so that they allow for revisited posts analysing in details the changes in the political in Iraq.

30th December- : Today marks the 7 year anniversary of the death of Saddam Hussein, Iraqi leader. Today also marks the day before the last of the year 2012, and the 9th day of the ongoing protests in Iraq against the rule of Al Maliki, the current Iraqi prime minster.

Today is indeed an interesting day to be monitoring social media platforms and view the dynamics of posting and commenting from Iraqis world wide, who are either engaging in hot debates about the nature and causes of the recent uprisings in Al Anbar, the largest province in Iraq , or commenting on the plight of Iraqis  after the death of Saddam Hussein. There are those also contesting the idolization of the former president taking shape in Facebook posts and  twitter hashtags that celebrate his life, and mourn his death.

Many posts on Iraq found on twitter and Facebook are linking directly between the protests happening nowadays to the death of Saddam Hussein, and trying to create a narrative that sees both events as cause-effect. This is deducted from posts that argue that 7 years after his execution, Iraq has become worse, hence the protests are a natural result of the deteriorating conditions of Iraqis both inside and outside Iraq.

These protests that Iraq is witnessing are proving to be quite different from the previous attempts by Iraqis to contest the status quo. I have written before that in 2011, and inspired by the events that took place in Egypt, Tunisia, and other countries in the Middle East, a Facebook page was created to encourage Iraqis to revolt against the current regime, and abhor immediately all of its attempts to divide the country on basis of sect and religion. The Facebook page "The Iraqi revolution" kept encouraging protests and civil disobedience, and recording all the incidents where number of Iraqis were seen protesting in Baghdad, Mosul and recently Al Anbar.

At times that did not witness any civil protests per say, the page kept posting about the government's wrong doings, and encouraging participation online in discussing and contesting the political situation in Iraq. The page also mimicked the famous solidarity campaign with Palestinian prisoners, to show support to Iraqi prisoners that are suffering from inhumane conditions and unlawful trials.

Two weeks ago, and with the recent government's tactics in attacking Sunni parliament members, and the news on the conditions of Iraqi women in prisons, the page started calling again for a revolution, specifically calling on the honour, and chivalry of Iraqi men in light of the violations against women in prisons; rape, torture and unlawful imprisonment.

The revolution became a necessity to protect the honour of Iraqi women, Iraq's narrative itself changed from protesting the status quo, to defending the lost honour of iraqis worldwide.

In the context of the East, more specifically the Middle East and Iraq, toying with words like Honour, and integrity can be quite daring to say the least. It poses a threat on the broadly-defined masculinity, and invites serious 'protection' of the allegedly forsaken honour. The posts in the Iraqi groups encouraging the protests were all inviting 'men' to protect their 'sisters' and 'daughters' from the government's injustice, posting photos of the tortured and raped victims and posing the rhetorical question of : " what if she was your sister?".

This is arguably intended to provoke a sense of anger and entitlement to Iraq's women, creating what I contend is a community imagined just like Benedict Anderson theorised,  where the Iraqi man is obliged to protect the honour of all Iraqi women, like they were his sisters, and daughters. The Iraqi woman in this context became one of the symbols of the uprisings; saving her consequently means saving Iraq.

It is also interesting that at these times that call for the protection of the 'woman' in Iraq, India sees its own version of the protests, in light of the Delhi rape victim that died recently. Social media platforms were flooding with posts about the status of women worldwide, and the rape that took place in India provoked serious questioning of plight of women world wide. However, and from my own personal observation of the reactions recorded on new media, there was an ideal missed opportunity to link those two events together, almost denying the significance of the feminist discourse in the political; Both India and Iraq revolted for women worldwide.

The Iraqi Spring as the protestors and online activists are calling it, is proving to be quite detrimental in contemporary Iraqi politics. Many are attributing its success to the fact that global news channels are actually covering the events, contrary to previous attempts by Iraqis that did not make it to headline news. One of the activists messaged me on twitter citing his excitement that Al Jazeera channel finally decided to " interrupt their continuos coverage of Egypt, and shed light on the protests ongoing in Al Anbar."

This reliance on media for the success of any protest and attempted coup poses serious questions about the 'imagined' role of old and new media in the Middle East, and invite serious investigation of the uses of media worldwide.

Iraqi news channels were also celebrated on social media platforms for covering the events and offering a platform for the activists to voice their opinions outside the 'online realm'. Channels such as Al Baghdadiya, Al Rafidayn and Al Mosoliya are amongst the channels leading in covering the uprisings in Iraq. Al Sharqiya channel, most popular amongst Iraqis worldwide is now condemned by activists that are calling for its boycott for failing to cover the protests. Facebook posts are calling on Al Bazzaz, owner of Al Sharqiya to explain the lack of media coverage on the events.

This is indeed an interesting moment in Iraq's contemporary history, where the extension of the political contestation from the online to the offline has actually started to echo globally. The role of media in creating the narrative of the protests is crucial, and a serious understanding of its dynamics is needed to fully absorb the changes in the political and social spheres.
Posted by Maryam Wissam at 3:10 AM