I have a certain fascination with suspended spaces and time(s), such as airports, train stations and in some instances hotel rooms. There is a lure to the revisited places that often witness pleasures, pains and heightened potentials, well at least for me there is.

I have always been attracted to such spaces, every time I travel, and God knows I've had my share in the last two years ( I've traveled through airports more than 40 times), and yet every time I do, I make sure I go at least 4 hours before my flight departs so that I'd spend some time in a terminal filled with people either welcoming new stories, or ending long ones. I'd always sit on a chair either with a book that often masks my curious looks, or a notebook where I jolt down stories i'd imagine happening in the wandering minds of fellow travelers.

Yes, I often also spend some time imagining or at times pushing visual images away in hotel rooms the moment I start occupying them, trying to understand what stories the walls have to tell, and what shames or pleasures the white clean sheets had to witness. 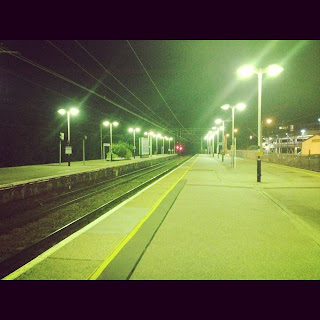 Train stations however remained foreign to me because of the nature of transportation in the city I lived in most of my life, that was until I moved to London, and they became central to my life. My last recollected memory of a train station was in Baghdad, I don't remember the name of the station, but I was probably 7 years old, excited about having our private cabin with bunk-beds to share with my siblings on our trip to Kirkuk where my Aunt ( may she rest in peace) once lived. Was there a big clock in the station? That's how I remember it, but also that's how they are portrayed in hollywood films, so perhaps my memory is tainted with western stereotypes, and romantic associations with the industrial revolution as it is portrayed in books and films I read and watched growing up.

Until I started traveling outside what was once the locus of my universe, I began observing train stations and my fascination with them grew even more.

I've spent some ample time in stations during my time in London, sometimes in passing as means of commuting, and others saying my hello's and goodbyes. I always looked for the odd couple that fought before one of them boarded a train away, or the ones that did not cry but laughed trying to ease the separation. I was in love with my selections, and often imagined that I would also reclaim the space when the time came to say my goodbyes, and create a counter-argument to the usual tears shed while departing.

But that never happened, instead I saw myself narrating in my head instances when I had to say goodbye to loved ones while it was happening! It was too intense, I'd hear a voice-over in my head describing the teary eyes, the shaking hands, and the embrace that truly suspends time. My mind also directs the whole scene where people move in time-lapse, while I am standing still feeling with every passing second, a life-time slipping away. My narrative in fact, became the most dramatic of them all.

A week ago, I revisited a station that I hate and love by chance, not intended, I found myself somehow forced to take it to reach a hotel-room I then called home. I walked in with so much caution, pretending I was a horse, that I only saw what was in front of me, and that my human eyes could not comprehend the sideways. I wanted to avoid that seat outside the station where I sat not so long ago crying because I had to live that un-coveted goodbye. I avoided the gateway which saw both the arrival of my solace, and the farewell to the arms. I tried to avoid looking at the station I was now walking through so much, that I actually missed both my gate and the train. 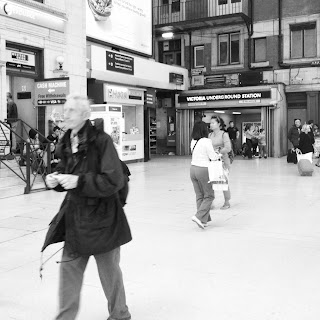 And then I looked behind, and saw that clock I have always imagined in the train station in Baghdad, and saw my little self crying because her daddy then could not travel with her to Kirkuk. I also saw that with every goodbye I said in the train stations of my life, I always shed rivers of tears because in their essence, farewells are hated by me. I stopped blaming myself for my overt sense of sensitivity, and accepted that my vulnerability to separation is rooted deep in losses I've lived through in my childhood and adult-life. I accepted then only that my sadness and fascination with train stations, airports and hotel rooms, comes from my continuous struggle with the temporality of it all: of life, moments, happiness and love.

I waited for the next train on a bench close to the one that I avoided, and I saw me sitting there crying genuinely as I said goodbye there once, and It did not bother me, in fact, I smiled at me and prayed that I will never stop crying for those who matter, but then leave. I also closed my eyes a little and prayed that the next time I am here, I am saying hello not waving goodbye.

*Title of this post is a the title of David Gray's Song found here: http://www.youtube.com/watch?v=-bzdrabPpRE
* Photographs are part of my collection of captured memories.

Posted by Maryam Wissam at 4:48 PM

I also get on storytelling mode in hotel rooms :) You should read Marc Auge's Non-Places

I would want to lie and say that I read this over and over and over again, but I haven't. So far, I 've read it about 3 times.
But I won't be lying when I tell you how much I've talked about this, how many times I shared it with my friends, telling them to enjoy this familiar feeling we all have.
I sincerely thank you for sharing your thoughts.